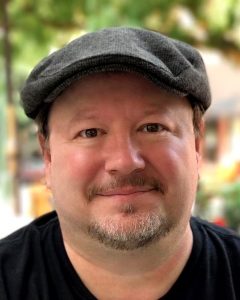 Learn the fundamentals of acting and how to apply them to animation. Learn to give natural reads by focusing on subtext, empathy and motivation. Learn how to match mouth flaps of animation while delivering a believable performance.

Most recognized as the voice of Krillin, and also Bardock on the wildly popular, animated TV show Dragon Ball Z and as an illustrator for, arguably, the most famous, independently published comic book series Elfquest. Strait has over 20 years of experience in the arts.

As a voice actor, Strait is considered to be one of the most recognized voice actors in the business. Besides Dragon Ball Z’s Krillin he has worked on many popular animated characters including Usopp in One Piece, Maes Hughes in Fullmetal Alchemist, and Cartoon Network’s laid back, robot host Toonami TOM. He has also worked as a writer and director on several TV series including Dragon Ball series, Case Closed, and Lupin the Third.

As a comic book artist he has 17 published works to date including his débuted self-published series Mr. Average featured in The Comics Journal and Elfquest which was published by both WARP Graphics and DC Comics. he’s considered one of the top Elfquest artists from its over 30-year history.

In 2007, he wrote and illustrated a graphic novel about a reluctant punk rock, faerie princess named Goat. The book, called We Shadows, was published by Tokyopop and was nominated by The American Library Association for Best Graphic Novel in 2008. The book received glowing reviews in many trade magazines including Publishers Weekly, Newtype, Play and Anime Insider.

Recently, Strait has reprised his roles in both the new Dragon Ball Kai and Full Metal Alchemist: Brotherhood series and plays the title role in the Xbox game ‘Splosion Man. Strait also began illustrating Marvel Comics’s sketch cards recently for Rittenhouse and fetches eBay prices up to $800 per card for his depictions of Marvel’s superheroes.

His current ventures are being contracted to write a biography called Line of Beauty: The Art of Wendy Pini and performing in the band White Girl.

We use cookies on our website to give you the most relevant experience by remembering your preferences and repeat visits. By clicking “Accept”, you consent to the use of ALL the cookies.
Do not sell my personal information.
Cookie SettingsAccept
Manage consent

This website uses cookies to improve your experience while you navigate through the website. Out of these, the cookies that are categorized as necessary are stored on your browser as they are essential for the working of basic functionalities of the website. We also use third-party cookies that help us analyze and understand how you use this website. These cookies will be stored in your browser only with your consent. You also have the option to opt-out of these cookies. But opting out of some of these cookies may affect your browsing experience.
Necessary Always Enabled
Necessary cookies are absolutely essential for the website to function properly. These cookies ensure basic functionalities and security features of the website, anonymously.
Functional
Functional cookies help to perform certain functionalities like sharing the content of the website on social media platforms, collect feedbacks, and other third-party features.
Performance
Performance cookies are used to understand and analyze the key performance indexes of the website which helps in delivering a better user experience for the visitors.
Analytics
Analytical cookies are used to understand how visitors interact with the website. These cookies help provide information on metrics the number of visitors, bounce rate, traffic source, etc.
Advertisement
Advertisement cookies are used to provide visitors with relevant ads and marketing campaigns. These cookies track visitors across websites and collect information to provide customized ads.
Others
Other uncategorized cookies are those that are being analyzed and have not been classified into a category as yet.
SAVE & ACCEPT